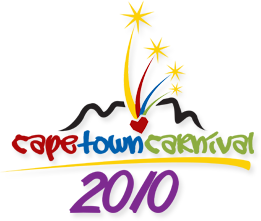 The Cape Town Carnival endeavours to create something new, where communities interact and celebrate uniqueness, but also unite the citizens of one of the most beautiful cities of the world.

The theme for the 2010 Carnival is "Rhythm, Roots & Boots", celebrating Cape Town's inherent talent in all things cultural and artistic, as well as paying tribute to a rich heritage.

Carnival themes include the following:

"Puzzle Pieces" is about Capetonian heritage.

This heritage includes food such as gatsbys, the spoken words of Xhosa and Afrikaans, the indigenous San and Khoi people, the holy cows used in lobola, political icons like Helen Ziller and historical places like Robben Island.

"Postcards from Cape Town" is about the images that come to mind when you consider the unique culture and heritage of Cape Town.

Think of the vibrancy of Long Street, the distinctive flower sellers and street hawkers, our very own District Six and the minibus taxis weaving through the city, and the majestic Table Mountain. And not forgetting Cape Town?s own time-keeper - the Noon Gun.

"The Sea" embraces Cape Town's link to the sea.
The city lies between the Atlantic and Indian Oceans and is where the first European settlers landed.

The sea also brought the slaves and other immigrants who now make up the vibrant culture found in this city.

"The Streets of Cape Town" is an ode to Cape Town's highways and byways.

Think of Adderley Street, which is presided over by the flower sellers and comes to life with the annual switching on of the lights.

Hanover Street - reminiscent of the city's slave history and the fishmongers.
Wale Street, the seat of our Parliament.
Long Street where we come together in a diversity of festive, nightlife activities.

Children of the Winds of Change

"The Children of the Winds of Change" puts the focus on the role wind plays in Cape Town.

The North-Westerly brings rain and new growth.
The South-Easter is a harbinger of shipwrecks, fires and chaos.
But the winds also bring out our sense of fun and play, think of kites.